Pharmaceutical companies are experiencing a significant change because of the shift in drug development toward more complex and expensive cell therapies with a focus on rare diseases. As a result, they are constantly seeking new ways to cut costs because of tighter budgets, patent expiration, and increasing competition, thereby leading to outsourcing and greater use of contract services.1 Central laboratory services are one of the most outsourced services by pharmaceutical companies because of the need to reduce the cost of trials and accelerate drug development to bring drugs to market as quickly as possible. There is a significant increase in the number of clinical sites to support individual trials, especially those involving temperature-sensitive drugs. The increasingly complex clinical trial environment has led to the growth of a central laboratory market in the past two decades in which the central laboratories provide harmonized testing services with consolidation of data from various trial sites.2 Along with other emerging countries like China and India, Latin American countries are proving to be promising markets in this specialty because of the increased number of clinical trials conducted in the region, as well as growth in the healthcare sector. 3Pharmaceutical companies have shifted their focus onto Latin American nations for conducting clinical trials because of the vast pool of subjects for trials and patients for marketed drugs.

Latin America has been one of the fast-growing pharmaceutical markets since 2008, and the region’s central laboratory market is perceived to have great potential because of the region’s competitive costs in comparison to the U.S. and European countries. The Latin American central laboratory market was valued at $118 to $122 million in 2013 and is expected to reach $150 to $155 million by 2017. 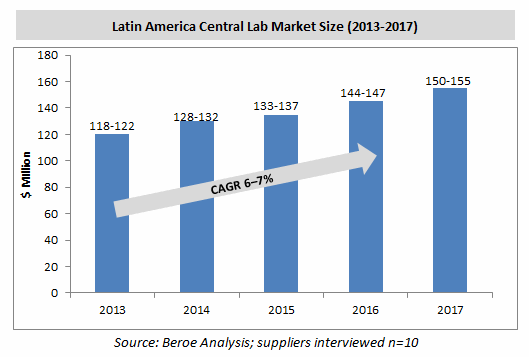 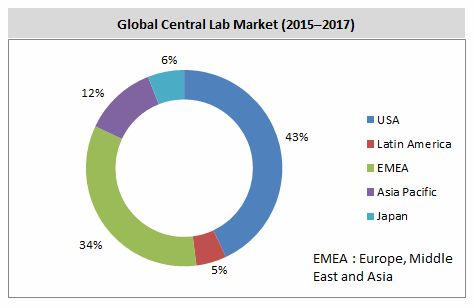 Suppliers enjoy a medium bargaining power in the Latin American region because the central laboratories market consists of multiple suppliers that provide services to several pharmaceutical organizations and other local laboratories. Also, the use of specialized diagnostic kits and lab equipment and the complexity involved in standardizing diagnostic testing services make it difficult for central laboratory service providers to switch between vendors. A high volume of operations by CROs has taken place in the region because of increased participation from regional countries like Argentina, Brazil, and Mexico in pharmaceutical clinical trials, thereby giving buyers strong bargaining power.7 Global clinical trial-focused central laboratories like Quintiles, LabCorp and ICON are in consolidation mode. Acquisition of small regional central laboratories by large players has taken effect to reduce cost, to fast-track drug development procedures, and to increase their geographical base.8 The need to keep up with permits, regulations, and other requirements unique to each individual Latin American nation and the mergers and acquisitions among CROs to offer customized and expanded support have increased barriers for new entrants into the market.7 The growing geriatric population of the region due to immigration from Northern and Central America has led to the growth of point of care (POC) services as an alternative over the past few years.

If you are outsourcing core lab services, understanding the Good Laboratory Practices regulations the core lab should follow is critical to developing successful products. Get a clear overview in this course.

Over the past few years, Latin American nations have shown a faster GDP growth in comparison to developed nations; however, the growth was less in comparison to other developing economies. With 80 percent of the population living in cities, Latin America is one of the most urbanized regions of the world. The urbanization is expected to reach 90 percent by 2020.5 Heterogeneous patient population and an improved and expanded priority on healthcare by Latin American governments has led to increased clinical trials in the region, in turn leading to considerable growth of the central laboratory market. Also, the health ministries and local ethics committees conduct routine audits of the facilities, thereby ensuring high quality standards. The increase in POC services might affect the central laboratory market in the future.

The central laboratory service providers include CROs that provide testing services in-house in addition to clinical trials, and global central laboratories that are harmonized laboratories for testing of samples from multisite studies. In addition to this, there are other local labs that are in close proximity to individual study sites and core laboratories that provide specialized services like medical imaging, analytical services, etc. The major players of the central laboratory market in Latin America include CROs like LabCorp, PPD, ICON, and global central labs like Q2 Solutions. Currently, around 60 to 65 percent of the market share is held by the top six service providers, where Covance and Q2 Solutions are considered the leaders, contributing 35 to 40 percent of the overall central lab market.

The most prevalent engagement model adopted by large pharma companies is based on preferred supplier. However, the industry is evolving to a point where strategic partnerships are becoming more common and significant across the industry. Although strategic partnership is the most favored model in the developed economies like the U.S. and Europe, pharma companies in Latin America tend to engage with a preferred supplier based on expertise in the region. The central lab market in Latin America is dominated by large pharma players that prefer volume-based fixed-unit pricing for central laboratory services. This is because of the large volumes of tests and samples they have to process in their day-to-day clinical trial operations. Multiyear engagement with a preferred partner, providing volume-based fixed-price services, is the most adopted contract model by pharmaceutical companies in this region. Functional services are generally outsourced to niche service providers in case of non-clinical studies when companies lack in-house staff.

Due the large volume of samples generated in the clinical trials, volume-based discounts are the best way to reduce the overall central lab services costs for sponsors. Preferred-partner discounts and loyalty discounts are other negotiation levers that can be used by the sponsors.

The greater disease variation and heterogeneous population coupled with cost-effective services provided by the central laboratories in the Latin American region have increased the attractiveness of this region as a potential central laboratory market. Moreover, the strong and modern healthcare system, qualified investigator community, and willing and compliant patients have increased the number of clinical trials in the region, thereby boosting the growth of the central laboratory market in Latin American nations. The large volumes of samples generated in the region provide buyers with strong negotiating power, enabling them to engage with suppliers through strategic partnerships.

Dhanya Krishnan Iyer is a research analyst of clinical research and development for Beroe Inc. Her focus categories include central labs and clinical development. She has previously worked at Bharat Serums and Vaccines Ltd. and with Bhabha Atomic Research Centre. She has a master’s degree in biotechnology from Vellore Institute of Technology. You can contact her at dhanya.krishnan@beroe-inc.com.